OK, I am running out of words to describe what I am seeing. I thought the views and landscape yesterday were amazing.  Today they far exceeded even what we were told we would see.  As we climbed to the summit of the Big Horn at 9,430′ elevation, the world was once again at our feet.

The goal today was to cross the Big Horn Mountains.  One of the other riders explained that it is more of geological wall that shoots straight up from the ground with a flat top.  That is exactly what it looked like as we road the first 32 miles to get there…an imposing grey, unwelcoming monolith which allowed no option but to go up and over it.  As we got closer, we could see some of the road winding up it and a retaining wall for part of it that looked impossible to get to.

Everyone was a bit anxious about the day, because of its length and the amount of climbing, the most so far.  Seeing that the strong, fast riders were anxious, didn’t bode well for the rest of us.

The route from the hotel was nice and flat and we had a tail wind, so we had a good warm up.  The first four or five miles from the start of the timed section were flat.  Then the climb started at 2% to 4 to 8 and 10%.  I just sat back and kept to an even pace, pushing on each stroke but not hard enough to make my quads ache and kept my heart rate down.  I stopped for a nano second at the water stop at mile 44, to catch my breath and nibble on something.

Then it did get quite a bit steeper. Along the retaining wall, it was apparently 14%,  but I got up it.  I zig zagged a bit, but just focused on the next year hair pin turn, and then the next one and the one after that.

I pulled into the stop at mile 50, having done the distance in 2:31…setting the first record for 70+ women. High fives all around for every one. I was surprised that I was only one minute slower than Gayle Tompkinson,  who I have ridden quite a bit with and who is 52. The first woman, one of the strongest riders on the trip, set the 60+ record.  I will post a picture showing some of the times.

But….we weren’t done climbing.  The next 5 miles felt and were steeper than what we had just done.  Damn.  That was exhausting.  It did level off though and we were now riding through meadow along the flat top.

As I was approaching the summit at 9430′ elevation, it started to cloud over and got cooler.  There was an 8 mile descent from there.  I was so cold that I stopped and put on knee warmers, heavier dry arm warmers and my hat under my helmet  (I had taken my sun arm sleeves and visored hat off on the way up, because I got too warm).

Then I played tag with the clouds as I zoomed down that side of the mountain.  I could see a patch of sun ahead of me on the road, but as I got near it and was looking forward to some warm air, the cloud would get there first.  I prayed that it wouldn’t rain before I got to the lunch stop.  The weather can be so unpredictable in the mountains and on other year’s it has been horrible.

I was mentally and physically done by the time I did reach the lunch stop at mile 77.  I realized, too, that we had another climb and a pretty tough technical descent….so that was it for me.  I hopped in a sag.  Actually, it was a car owned and driven by one of the rider’s wives who is along on the trip crewing part time.  Wonderful.  Several of us got chauffeured right to the hotel.

Yes, it was a very hard day, but stealing a line from the movie about a women’s baseball team….”if it were easy, everyone would be doing it.”  I do love the challenge and I relish that I can be out there pedaling along  with the best of them.

It was hard to get a photo because we were riding right into sun, but this is what we stared at for 30miles.. 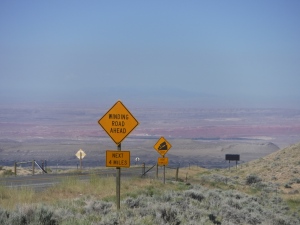 This is part of what we climbed up. 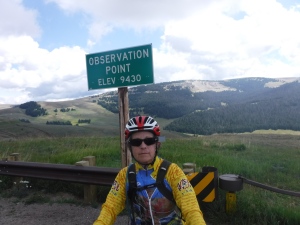 Looking a little undone by it all.

This is actually the bulletin board that greets us at the end of each day detailing when and where breakfast the next morning will be, what time  we can load our gear bags and when we can head out for the day.  There are nearby restaurants listed as well.